The cybersecurity sector’s largest ever deal, Broadcom’s landmark acquisition of Symantec for $10.7bn, set the tone for an uptick in transaction volume and continuously strong valuations, according to Hampleton Partners’ latest analysis of global cybersecurity mergers & acquisitions activity.

Cybersecurity transaction volume rose by 15% in the second half of 2019 compared to that of 2H2017. Valuations have also remained healthy, with EV/S multiples consistently trading around 5x for the past four years – significantly above the 3x valuations seen in the wider enterprise software space.

Axel Brill, director, Hampleton Partners, said: “The number of cyberattacks, as well as their complexity, is growing rapidly. Cybersecurity vendors will have to move quickly to keep ahead of malware and hackers.

“Cyberattacks are some of the most dangerous threats for businesses across all sectors and industries, demanding management time and increased investment in technologies like AI to protect against vulnerabilities. There’s no doubt that AI-focused cybersecurity vendors will be the most sought-after future M&A targets in this sector.” 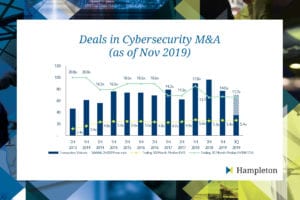 Palo Alto is the most active acquirer on an annual basis for the second year in a row (measured by number of acquisitions completed in the last 30 months). After completing three transactions for a combined $563m last year, Palo Alto spent nearly that amount on acquiring security automation and orchestration software provider Demisto for a total of $560m in February. In May, the company also acquired enterprise container and cloud security software provider Twistlock for $410m.

Overall, the company nearly doubled its M&A spending year-on-year, spending almost $1.1bn so far this year on a total of four cybersecurity transactions. In addition to being the most prolific acquirer, Palo Alto has also paid some of the highest valuations disclosed in the space, paying 46.7x and 27.3x EV/S for Demisto and Twistlock respectively.